How the Internet Saved 2016

We can all agree that 2016 is on the list of Crappiest Years in American history. We lost many of our favorite legends and icons: Prince, David Bowie, Alan Rickman, Muhammad Ali, Gene Wilder… Nope. Not sobbing. Just… leaking water… We had one of the most ridiculous and laughable presidential elections. And EpiPens cost way too much for comfort.

But if we know one thing here at Post Launch, it’s that the Internet in all its glory can do a magnificent job at bringing the laughs and facepalming. But, before you guzzle down your champagne and kiss 2016 goodbye, enjoy some of the Post Launch digital marketing team’s favorite things that happened on the Internet this year.

How the Internet Saved 2016

A few of Anne E.’s favorite Internet things from 2016

Tweets that get me. (Awkward achievement unlocked.)

Whoever this person is in the world, their posts make me smile everyday.

This GIF of Hillary Clinton. Pretty much the funniest thing I’ve ever seen in my entire life. And I never exaggerate. Ever.

Some of the things Angela loved this year

Beyonce released the masterpiece that is Lemonade with no warning and without any promotion, so she surprised the whole world and because she’s Beyonce, she was able to successfully earn the most Grammy noms any female artist has ever earned. (Clearly, I’m a proud member of the Beyhive.)

The Evil Kermit meme because we love to indulge in our bi-polar evil twin tendencies. 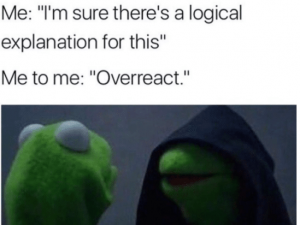 Literally any of the Nifty and Tasty videos from Buzzfeed, because duh. #FoodPorn #DIY #CraftyAF 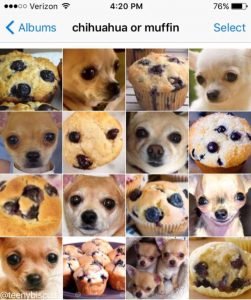 Memes about how horrible 2016 was…

Boaty McBoatface! What happens when you let the internet decide what to name a multimillion dollar British polar research ship. Boaty McBoatface. And it was awesome.

Shia Labeouf. Shia ended 2015 with a Shia LaBeouf Movie marathon that went viral. But it was his Oxford lift project that made my internet experience in 2016. But that was not all. Check out all his strange but viral campaigns and then check out his latest viral video, freestyle rapping on the Sway show. Basically, Shia LaBeouf saved the entire Internet in 2016.

Most of us can probably safely agree that the 2016 election season was rough. And the fallout from the election results was not much better. One good thing to come out of the 2016 presidential election results: Obama-Biden memes. Oh, the beautiful bromance memes! See examples below. 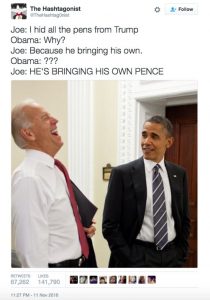 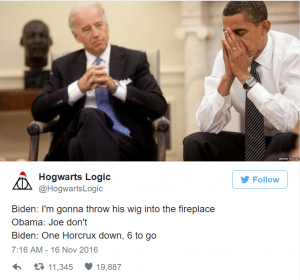 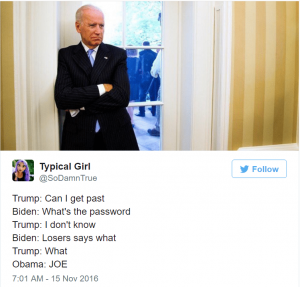 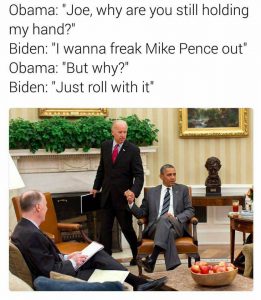 Ted Cruz is the Zodiac Killer. I, personally, don’t think he is. But if only he killed during those Republican debates…

Google. Because I don’t have any friends. I spend my nights Googling. It’s free and links me to local psychiatrists and Jamba juices.

Get You a (Wo)Man Who Can Do Both. If you have a man who can bake cheesecake and create homemade shampoo, what more do you want?

How the Internet save 2016 for Michelle

Obama lighting the Christmas tree and pardoning a turkey for the last time as president.

Obama and comedians in cars getting coffee.

Any dog meme ever created or thought of being created, past, present, or future because dogs are amazing. 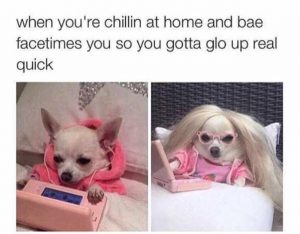 Youtube Yoga: because I don’t want to embarrass myself in public.

Reddit. Someone’s life is always worse than yours, and if they exist, they’ve probably posted about it on Reddit.

My two favorite women, Michelle Obama and Ellen, went to CVS together.

My discovery of On The Grid, the website that shows you places you actually want to visit in a new (or old) city.

That time Canada told us we’re already great during a time that did not feel so great.

How the Internet saved 2016 for Jen

When athletes use their platform to stand for something, it gives me a serious case of the feels. And this unified statement between both the NBA and WNBA exposed how real and rampant racial issues are in 2016. And prejudice knows no gender. It also raised questions of the dynamics of police and society. I am totally on board for peaceful protests and awareness, which is why this is one of my 2016 Internet highlights. 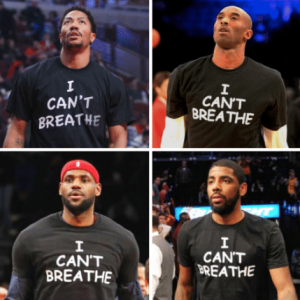 SOML Videos and how it literally…the “Story of My Life.”

The Internet saves me daily because I get to shamelessly write about my family, friends, and life with no filter. Cheesy… but whatevssssss!

Ken Bone: Love him or hate him, Ken singlehandedly saved a presidential debate and became an Internet phenomenon.

Pokemon GO: Childhood memories were relived as Niantic’s augmented reality game took the entire world (and the Internet) by storm.

Windmills are the greatest threat in the US to both bald and golden eagles. Media claims fictional ‘global warming’ is worse.

Sorry losers and haters, but my I.Q. is one of the highest -and you all know it! Please don’t feel so stupid or insecure,it’s not your fault

Here at Post Launch, we pride ourselves in helping make the Internet what it is: a crazy, intense, emotional, random, keyword-filled smorgasbord of fun and sagacity. Hopefully, your 2016 wasn’t as crappy as the Internet made it seem. But if it was, there’s always next year!

Make it a New Year’s Resolution to improve your digital marketing in 2017. Don’t know how to do it? Or, don’t want to do it yourself? Give Post Launch a call. Although we house a bunch of meme-loving weirdos, we’re pretty talented at this whole web presence marketing stuff.

Share with us how the Internet saved 2016 for you!